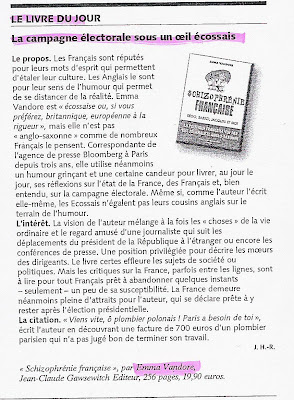 The subject: French people are known for their vibrant language which reflects their culture. The English for their sense of culture which allows them to distance themselves from reality. Emma Vandore is “Scottish, or if you prefer British: European at a stretch,” but not “Anglo-Saxon” as most French people think. Correspondent for the Bloomberg press agency in Paris for three years, she uses a sharp humour and a certain candour to give, day by day, her reflections on the state of France, French people, and of course, the electoral campaign. Even if, as the author writes herself, Scottish people don’t have the same sense of humour as their English cousins.
The interest: The vision of the author mixes both parts of ordinary life and the wry vision of a journalist who follows the President of the Republic on his official trips abroad and attends his press conferences. A privileged position to describe the habits of the rulers. This book skims the topics of society and politics. But the critics on France, sometimes between the lines, should be read by all French people ready to abandon for a few moments _ only_ their susceptibility. France remains full of attraction for the author, who declares ready to stay after the presidential election.
The quote: “Come quickly Polish plumber! Paris needs you” written by the author when she discovered a bill for 700 euros from a Parisian plumber who hadn’t bothered to finish the job.

It all began very early in the morning on France Info where Mireille Lemaresquier asked me for my views on les petits candidates.
Later, I discovered that Jacques Hubert-Rodier had reviewed my book in Les Echos
In the evening, I was invited on Patricia Loison’s evening show on i-tele.

The Power of Story @ Hitchin library

Drama @EdinburghAirpo1 when I smashed the bottle gifted by grannie to my 4 year old because she ‘wants to be a… https://t.co/MZP8WoLBZv

Emma Vandore a day ago