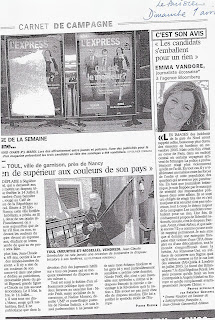 “The candidates get exited for nothing.”
Emma Vandore
Scottish journalist for Bloomberg.
“The images of the incidents at the Gare du Nord reminded me of the much stronger images of the suburban riots in November 2005. But this time it was in the heart of Paris, in a central place frequented by foreigners. The police probably reacted more violently than they admitted. In any case, there is clearly a bad feeling between the forces of order and the populations of these areas which feel persecuted. As a British journalist, I was struck by the lack of serenity of the politicians. They felt obliged to react very quickly and its as if all of a sudden security has again become one of the major themes of the campaign. The candidates are getting excited over nothing. One moment, they are getting excited about national identity. The next it’s the flag. Before it was Airbus, and then what? There is a sort of permanent zapping. I’m sure that f tomorrow a French company was to become victim of a foreign takeover or if production were to shift abroad, everyone would get stuck in. In the UK, we try to stay calm whatever happens, as was the case during the Al-Qaeda terrorist attacks in London in July 2005. The favourite of the British? I’d say Segolene Royal. People think she’d make a good contrast to Angela Merkel in Europe and she’d be a good replacement for Jacques Chirac.”
Interviewed for La Parisien, France’s most popular national newspaper

Greece Gets Some Relief on Credit Rating

So I wrenched myself away from my family (after all this covid time together it did feel like a wrench, but still)… https://t.co/A4p8P6pWoI