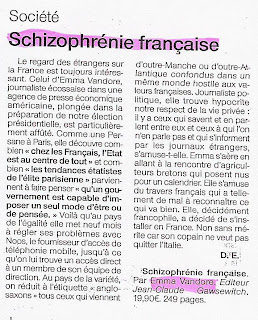 The views of foreigners on France is always interesting. That of Emma Vandore, a journalist at an American economic news agency, plunged into the run-up for our presidential election, is particularly sharp. Like a Persian in Paris, she discovers how much “in France, the state is at the centre of everything” and how much “the State-centric tendencies of the Paris elite” make people think “that a government is capable of imposing a single way of thinking or being.” See how in the country of equality she spends nine months trying to solve a problem with Noos, a mobile telephone service provider, until she finds direct access to a member of the governing team. In the country of variety, we reduce everyone who comes from the other side of the Channel or the other side of the Atlantic to the etiquette ‘Anglo-Saxon,” a world which is hostile to French values. A political journalist, she finds our respect for private life hypocritical. There are those who know and who speak about it, and those who don’t know who are informed by foreign newspapers, she says, amused. Emma takes a breath of fresh air by going to visit Breton farmers posing naked for a calendar. She notes wryly that French people have difficulty recognising what they are doing right. Decidedly pro-French, she has decided to remain in France. Not without merit because her partner doesn’t want to leave Italy.
Review in France’s most popular newspaper.

Why the French Should Drink Tea

May 1: Manhandled by the FN

Sunrise #swim: set me up something #magical for the #schoolrun https://t.co/Tg20G9759S

This is an important addition to the #futureofinfrastructure series, arguing for how to make our structures of forc… https://t.co/ehIOJ6aHA1

For the next #techcity survey @iammaxnathan, how many blands? https://t.co/YSL6ADQPBb